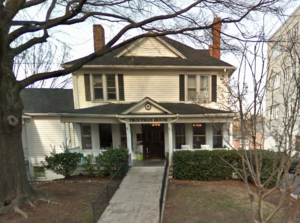 The Matthews House is a two-story frame Colonial Revival dwelling characterized by a pyramidal roof with cross gables, interior end chimneys, paired sash windows, two front bay windows, and a front porch with pedimented entrance bay, Tuscan columns and a plain balustrade. Because its early twentieth century construction date can still be seen clearly in its form and basic detailing, the house continues to contribute to the architectural character of the West End. Nevertheless, alterations which probably date from the late 1970’s when the house served as a funeral home have diminished its original level of significance. These changes include one-story additions on the west side and rear, handicap ramps, and vinyl siding.

Frank L. Matthews purchased the property in 1889, but did not move there from “Cherry near First” until ca. 1908, The house remained in Matthews’ ownership until 1943, when he sold it to William Maurice and Patsie L Hoare. They owned it until 1977. (SH, TR, CD)

The property later came into the possession of Augsberg Lutheran Church located in the adjoining lot just west of this property and has been used as an income-property known as Troutman House. 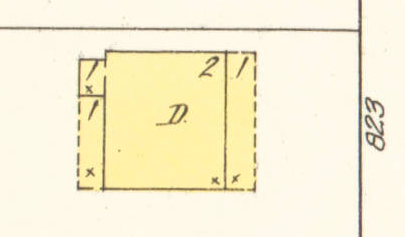