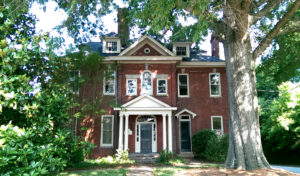 One of the largest brick houses in the West End, the Taylor House is a stately expression of the Colonial Revival style. It is a formal two-story house with a hip roof, multiple hipped dormers, tall interior chimneys, keystoned window lintels, and an accented center bay. This bay consists of a paneled entrance with sidelights and fanlight transom, a pedimented entrance porch with Tuscan columns, a Palladian window flanked by brick pilasters, and a pedimented gable. Originally the house had a wrap-around Tuscan porch (see 1912 Sanborn Map excerpt below), but this was replaced by the present Tuscan entrance porch in 1929. Across the rear of the house is a two-story wood shingled addition, probably the enclosure of the original porch, which is relatively unobtrusive. The interior is richly detailed with a Colonial Revival closed string stair, a paneled wainscot, and a variety of handsome mantels.

William B. Taylor (1851-1933) moved with his wife, Elizabeth McCaw Boggs, to Winston in 1883 and the following year, with his brother, Jacquelin (74), he started a tobacco factory which became known as Taylor Brothers. He and his brother maintained a strong interest in Socialism and worked for reforms to benefit working men and women. Taylor’s wife purchased this property in 1900, and the house, which was designed by the architectural firm of Blauvelt & Gates of Greensboro, was built immediately thereafter. It remained in the Taylor family until 1972.

Behind the house is a brick three-car garage which appears to have been built in the 1920’s. It has recently been converted to an office (contributing). 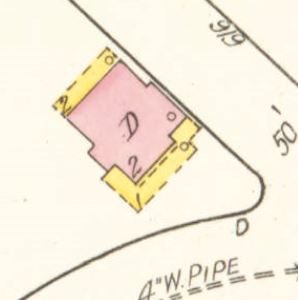 Close inspection of page 34 of the 1912 Sanborn Map reveals that a one-story frame (wooden) porch once spanned the front of the Taylor House and wrapped around the left corner.  The rear of the house is shown with a 2-story wooden (frame) porch. The 2-story main building is shaded pink to indicate brick. The main house and both porches are suggested to use slate or tin as a roofing material.