The Wright-Izlar House is a two-story frame late Victorian dwelling with characteristic irregular massing, a pyramidal and gable roof, and a variety of ornamentation, including a broad band of wood shingles between the first and second weatherboarded stories and a porch — with turned posts, simple brackets, and a plain balustrade — which follows the receding sections of the facade. Unobtrusive alterations from the past twenty years include the partial covering of the weatherboarding with aluminum siding and a small rear shed addition.

Behind the house is a two-story, non-contributing brick garage/apartment of undetermined date, with a low hip roof and a second floor balcony. The 1912 Sanborn map (see below) does show a structure in that position, but of much smaller scale. A large frame addition appears to post-date 1950. 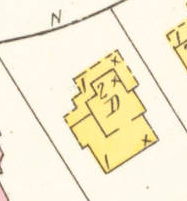