The Zevely House is listed independently on the National Register. Typical of German-influenced North Carolina Moravian structures, it is a two-story, Flemish bond brick house of simple design with a gable roof, interior end chimneys, a slightly asymmetrical three-bay facade, and a three-room plan.

Built circa 1815, it is the oldest house remaining in what became the town of Winston.

The Zevely House was moved in 1974 to its present location from its original site at 734 Oak Street (see below), where it was endangered. The main block of the house was restored on exterior and interior, and a conjectural front porch and compatible rear shed wing were added. Behind the building is a landscaped gravel parking lot. The relocation and restoration of the Zevely House have had a minimal adverse effect upon its integrity and have insured the preservation of the building. At the same time, while the Zevely House is of an earlier period than the other buildings in the West End, it both complements and is complemented by its present surroundings. (NRN) 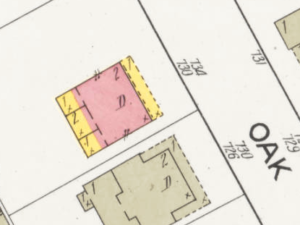 Neman van Zevely (b. 1780, d. 1863) followed an unconventional path. He trained as a joiner in Salem, became a cabinet-maker and took an apprentice without having gained the title of ‘master’. Even after earning the title of master, some wanted him removed from the position yet his expertise outweighed their concerns for a time. He remained a character of some renown in Salem which perhaps informs his decision to live outside the community in Winston (source).

A 2010 Winston-Salem Journal article recounts how Peter and Barbara Smitherman had the building moved to its current location in 1974 and opened the Zevely House Restaurant there a year later in 1975. The restaurant became a prominent fine dining establishment and operated under that name for 34 years before becoming Bernardin’s in 2010.