This Colonial Revival dwelling is typical of many of those built in the 1910’s and 1920’s, including some of those in the West End. It is a two-story frame structure with a stuccoed first story, a shingled second story, a gambrel roof with long front and rear shed dormers, and a north side sun porch with heavy stuccoed columns and casement windows. The paneled front entrance has a fanlight transom and a gabled hood.

Newton G. Fletcher was first listed at this location in 1916. He was with Fletcher Brothers, retail clothing, and was president of The Vogue. The Fletchers remained here until the house was sold in 1924 to Thomas W. Blackwell.

Blackwell was an employee of RJ Reynolds Tobacco Company, and in 1940 was Mayor Pro-Tem of Winston-Salem. The house remained with the Blackwell family until 1957. (OS, CD, TR, SH)

Behind the house is a contributing two-car weatherboarded frame garage with a pyramidal roof, which appears to have been built at the same time or shortly after the house. 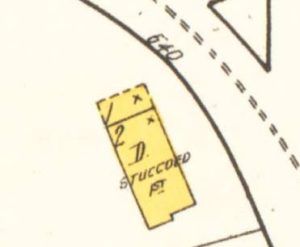