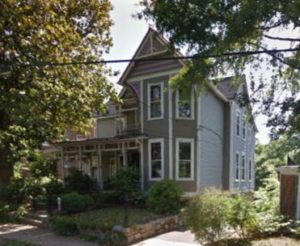 This 1890’s vernacular Queen Anne house has detailing typical of its period, though not all of it is original to the house. It is a two-story weatherboarded frame house with a gabled roof, a right front projecting octagonal bay, and a wrap-around porch with a center bay balcony. The detailing of the projecting bay (the shingled gable, the sunburst gable peak decoration, and the fan spandrels under the gable) are original, but the ornate porch and balcony detailing, with a variety of turned and sawnwork ornamentation, is a ca. 1980 replacement of Colonial Revival detailing which included Tuscan columns and a plain balustrade. The Victorian ironwork porch around the front yard is an addition.

LL Lunn purchased the property on March 15, 1892, and presumably built the house soon thereafter, for in the 1894/95 city directory the Lunn’s were listed at this location. LL and Lula Agnes Lunn kept the property until 1900, when it was sold to Mable A. Holff, The Holff family retained it until 1930. (D, TR, CD)