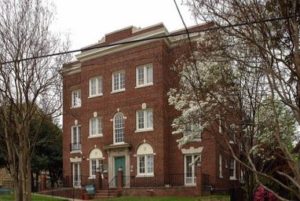 The Colonial Revival-influenced Summit Apartments building is among the most handsome erected in Winston-Salem’s 1920’s boom period. The three-story brick building with projecting central facade and slender columns of bay windows on either side is detailed with a Classical cornice and stepped parapet, casement windows and French doors, balconies, and a variety of Colonial Revival refinements.

George W. Coan Jr., president of the Morris Plan Industrial Bank and of the prominent Twin City Club, purchased the property in 1925 and by the following year the building was under construction. It was built on the side of the Liipfert House (222), which several years before had been rolled down the hill to Jersey Avenue (TR, CD, SM, I-Ronnie Childress)