Located on a pie-shaped lot, the Barkley-Huffman House is designed to address two sides of the sharp curve in West End Boulevard The transitional late Victorian-Colonial Revival cottage is one of the most handsome of the smaller houses in the West End. It is a one-and-a-half-story weatherboarded frame structure characterized by a steep hip roof with cross gables and a curved wrap-around porch with Tuscan columns and a plain balustrade.

Ernest L. Barkley, an employee of R. J. Reynolds Tobacco, occupied the house during its first decade, and the E. Bynum Huffman family owned the house for the longest period, between 1937-1976. (SH, CD, TR)

Behind the house stands a noncontributing two-car concrete block garage with a steep gable roof, dating from the mid-twentieth century. 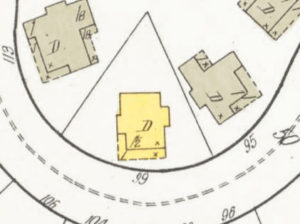