This handsome Colonial Revival house designed by architect JS Zimmerman appears virtually unaltered from its original appearance, judging from an early photograph. According to the owner, however, by 1973 the porch had been infilled as part of the nine apartments in the house and had to be reconstructed, based on the early photograph. The two-story weatherboarded frame house features a hip roof with overhanging modillioned eaves, a matching dormer, and a wrap-around porch with a pedimented, slightly projecting entrance bay, paired Tuscan columns, and a plain balustrade. The entrance has ornate beveled glass sidelights and transom. The interior is generously proportioned and has elegantly simple Colonial Revival detailing.

James C. Dodson, a tobacco man from Pilot Mountain who moved to Winston-Salem to work for RJ Reynolds, was the original owner of the house. He and his family lived here until the late 1920’s, when he built a Colonial Revival mansion on Stratford Road.

From 1935 to 1973 Ludie and Thomas Wilson and their family owned the property, during which time it was converted to apartments. It has been restored as a single family residence. (TR, CD, SH, OS)

Servant’s house/garage, Contributing: Behind the house, and between it and 641 Summit Street, stands a two-story Flemish bond brick structure with a hipped roof and segmental-arched windows and garage openings. According to the present owner, this building is and always has been a shared outbuilding for the houses on either side of it. Originally servants’ quarters and a three-bay garage, the building is now used as apartments. According to the Sanborn Maps, it was erected between 1917 and 1924. 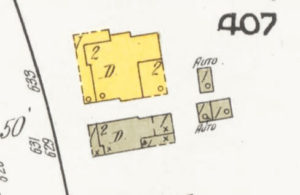