Listed as non-contributing, but marked contributing in handwritten note 2009.

This house, which appears on the 1917 Sanborn Map, still shows evidence of having originally been an attractive Colonial Revival dwelling. The two-story frame house retains its gable roof, pedimented and segmental-arched dormers, south side porch and balancing north side room. However, the combination of vinyl siding, fenestration changes, north side addition, and fire escape across the facade to a second floor entrance have seriously diminished the architectural integrity of the house. (SH) 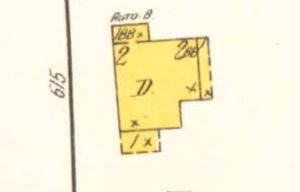