The Coleman House is a monumental Colonial Revival dwelling which is one of the most sophisticated houses of its period remaining in Winston-Salem. The two-story brick house has a seemingly endless collection of rich detailing on both exterior and interior. Among the exterior details are a truncated hip slate roof with pedimented cross gables and dormers, a garland frieze, dark brick lintels and corner quoins which contrast with the light brick body of the building, a large Palladian window above the center bay entrance, a wrap-around porch with Ionic columns, a turned balustrade and a full balustraded deck above, and a collection of leaded and jeweled glass window details. Even the rear is handsomely detailed with a two-level porch with Tuscan columns and a latticework screen. The elaborate main entrance has a large glass panel double-leaf door with leaded and beveled glass sidelights and transom. Just through the entrance is a vestibule with fancy tilework floor and its own set of double-leaf glass doors with jeweled glass sidelights and transom.

Among the notable interior features are a paneled hall ceiling, a paneled wainscot, a coved cornice, an elaborate Colonial Revival stair with a fireplace opposite it, sliding pocket doors, a variety of mantels (including one in the Art Nouveau style), a particularly well-developed dining room (with a high paneled wainscot, an arcade, and built-in cabinets), original lighting fixtures, and even fancy bathroom tilework and fixtures. The house has been little altered.

On November 8, 1901, JC and Frances Conrad conveyed to their daughter, Mary Conrad Coleman (Mrs. John), a lot at the corner of Summit and Sixth Streets and soon thereafter the Coleman’s erected this house. John Coleman was an independent tobacconist in Winston-Salem. After his death in 1929, the house remained in the family until 1935. Since 1954 it has served as the Friendship House, a home for recovering alcoholic women. (D, TR, CD, SM, WSJ, I-Mildred Coleman Marshall) 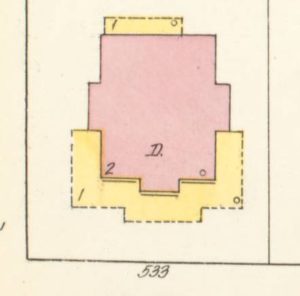 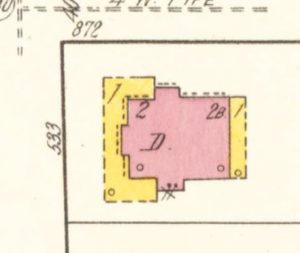