The Pepper-McClung House is a large, two-story frame, symmetrically-planned Colonial Revival house with a hip roof, a gabled front dormer with a Palladian window, slightly projecting bays on either side of the house, and a large wrap-around porch with Tuscan columns and a deck above the central entrance bay.

The focal point of the exterior is the elaborate front entrance with a glass and wood paneled double-leaf door, leaded and beveled glass sidelights and transom, and a Classical surround with Roman Doric columns and pilasters. Flanking the entrance are large windows with leaded glass transoms. Alterations include the addition of aluminum siding during the last decade and the replacement of the original Roman Doric columns with Tuscan columns, probably during mid-century, but these changes do not destroy the architectural integrity of the house.

Georgia A. Pepper purchased the property in 1895, and she and her husband, Thomas, lived first in a one-story house. Between 1907 and 1912, however, the present house was constructed. It remained in the Pepper-McClung family until ca. 1970. (SH, TR, CD) 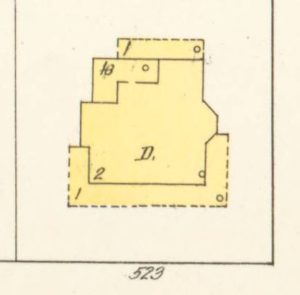 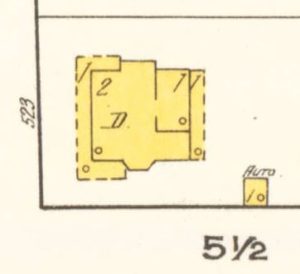