er cancelling the event the week before due to the blizzard of ’18, the 2018 West End Holiday Homes Tour ran on December 16th 2018 from 1-4PM. Seven of the original eight houses were still able to participate! Thanks to the kind folks at Joymongers Barrel Hall, 480 West End Boulevard for letting us use their location for the starting / ending point for the tour! 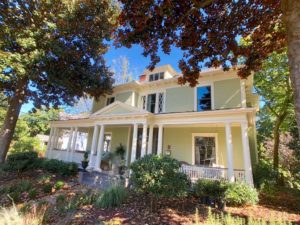 Recently featured in the Winston-Salem Journal (September 2018), this handsome Colonial Revival weather-boarded frame house features a hip roof with ornate eaves, a matching dormer, and a wrap-around porch with paired Tuscan columns and a plain balustrade. The entrance includes beveled glass sidelights and transom. The property is detailed on the 1917 Sanborn Map, page 85.

The home was converted to apartments sometime in the middle of the twentieth century, but was returned to a single family residence after the Waite family purchased the home in the early 1970’s.

James Dodson, a tobacco man from Pilot Mountain who moved to Winston-Salem to work for RJ Reynolds, was the original owner of the house. 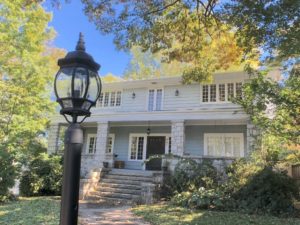 Rare in the West End, the Diehl House exhibits strong architectural elements of Prairie style  while still embracing Craftsman elements, at the height of style in the late 1920’s.

The approach to the property reveals a double-flight of granite steps with the drive curving gracefully around the northern side. The granite continues onto the front steps and porch to reveal a broad Craftsman front door with casement windows for sidelights.

The two-story frame house has a low hip roof with overhanging enclosed eaves and groups of casement windows which visually increase the horizontal emphasis of the house. The interior boasts a wide central entrance hall, boxed beam ceilings and high paneled wainscots in the hall and dining room.

The property was owned by Clarence T. Leinbach, vice-president of Wachovia Bank, from 1925 to the late 1960’s, but he lived on S. Main Street, and this house was for years the residence of his sister, Bertha, and her husband, Ray B. Diehl, an accountant. 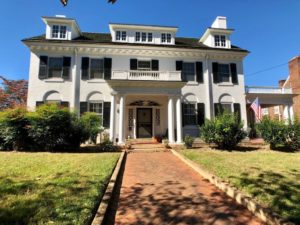 The Galloway House features a row of front dormers above a five-bay facade with first story windows set within blind arches. A Federal style central entrance with six-panel door, fancy sidelights, and a fanlight transom presents and impressive entry for visitors. The interior is richly detailed with a variety of Federal Revival and transitional Federal-Greek Revival style mantels.

The Galloway House is one of the most outstanding Colonial Revival dwellings in the West End. Design elements suggest the influence of Charles Barton Keen’s design for Reynolda House, completed the year before in 1917. The home was featured in the prestigious 1924 publication, Art Works of Piedmont Section of North Carolina (Part-1, Page 5).

Ida Galloway purchased the property in 1912, but she and her husband, Robert, continued to live in their Fifth Street house (177) until building this house is 1918. Ida was the daughter of Frank Miller (see 176 and 108), and Robert Galloway was president of Smith-Phillips Lumber Company. This remained the Galloway residence until 1972.

The Poindexter Cottage is a one-story weather-boarded frame dwelling with a gable roof, a pair of interior chimneys, a front porch with chamfered posts and a plain balustrade.

The house was moved to this location in 1978 from its original location about a quarter mile south from here at the location of 5th and Spruce to avoid its destruction during the expansion plans of Integon (later housing GMAC Financing and now the budding Winston Starts Non Profit Entrepreneurial Center).

The cottage is listed on the National Register along with its companion house next door which was moved at the same time. They are still situated next to each other and filled a gap in the streetscape present at the time of the move, architecturally complimenting houses of compatible period, material, scale, and character.

Henry Dalton Poindexter was a local merchant and and lived with his family in the house at its prior location for about twenty years after its construction around 1874 before moving his family to the large Queen Anne house next door (See inventory item 32).

This property tastefully blends elements of both Colonial Revival and Craftsman architectural styles, a common interplay throughout the West End. The two-story dwelling has a weather-boarded first story, a wood shingled second story, a low hip roof with overhanging eaves and matching front dormer. Visitors are welcomed by Craftsman style doors and windows, a wrap-around porch with chamfered posts on paneled bases with simple brackets and a plain balustrade.

The 1912 Sanborn Map shows a foundation at this site, and the house is shown on the next map in 1917. John and Daisy Glenn occupied the house in the mid 1920’s, but by the early 1930’s it was the residence of the EJ Angelo family, who operated a grocery on nearby Burke Street. Della Johnson Walker, widow of Pierre, purchased the house in 1942 and retained ownership until 1973.

With views across to Hanes Park, this one-and-a-half-story bungalow employs a pebbledash first story with a wood-shingled upper story. A steep gable roof with overhanging bracketed eaves and front shed dormer create a strong horizontal presence along the Boulevard. The front porch shelters a Craftsman entrance and extends beyond the house on the south side to form a large sun room.

Dr. Roscoe L. and Mary G. Wall owned the house from 1918 to 1929. Thomas and Sarah Armstrong owned and occupied it during the 1930’s, and in 1939 Franklin F. and Antoinette Shoemaker purchased the property, remaining in their ownership until 1963. 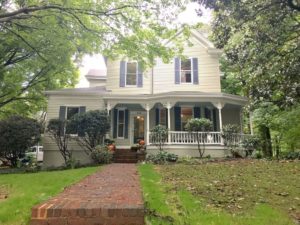 This Queen Anne style house is notable for its irregular configuration and multi-gabled roof. The bow-fronted porch displays a delicate spindle balustrade with sawnwork brackets atop turned posts.

The house was built at the northwest corner of Spruce and Second Streets for WH McGehee, an employee of Brown-Rogers Company where his family lived until 1917, when Maggie Rierson, a teacher at West End School, purchased the property and retained ownership until 1978. The house was then threatened with demolition and moved it to the present site by John P. Ozmun.