Thanks to all our sponsors, volunteers and neighbors in helping make this year’s tour such a success. We hope it becomes a part of your future holiday tradition! Remember – The West End Holiday Homes Tour is a biennial event, occurring in December of even years. We hope to see you in 2018! 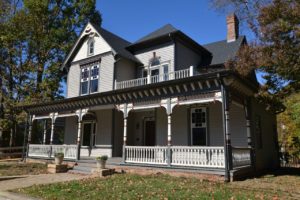 Brock-Horn-Maslin House at 857 West Fifth Street, 1890’s (inventory property 171). This late Victorian masterpiece is considered one of the fanciest Victorian dwellings in the West End. Adorned on the outside with wood shingled gables, sawn-work gable peak ornaments, a tower with a Palladian window above the entrance, and an ornate front porch with turned posts and balustrade, the interior of this home elegantly complements its façade,as a handsome open string stair with a ramped hand rail and spiral newel grace the foyer, while paneled and beaded board wainscot decorate the walls. As a point of interest, it is believed that the home’s original porch wrapped all the way around the west side of the house, but was eventually enclosed by the Maslin family in 1924. [AnythingPopup id=”2″] 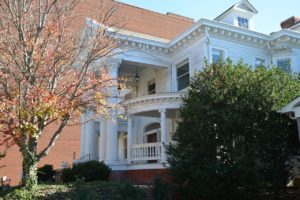 Rosenbacher House at 848 West Fifth Street, 1909 (inventory property 163). Standing above a terraced lawn overlooking Fifth St, the Rosenbacher House is one of the grandest of the Neo-Classical Revival dwellings in Winston Salem. The large two-story weatherboarded house is dominated by a monumental two-story central portico with Corinthinan columns. Enhancing the Classical design of the façade are one-story curved porches with Ionic columns and turned balustrades. The leaded, beveled glass sidelights and fanlight transom turn simple lamp light into sparkling magic in the evenings.The interior of the house is as exceptional as the exterior with majestic sliding pocket doors, ornate Colonial Revival stairway, and priceless woodwork throughout. [AnythingPopup id=”3″] 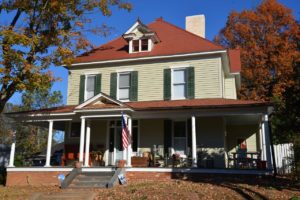 Originally listed in the 1913 city directory as the residence of DC Crutchfield, the home was named after Oscar Schaub, a prominent ear, nose and throat physician and surge on in the community. Oscar and his wife, Alice lived in the house from 1916 until the early 1930s, although tax records indicate it was actually owned by Burton Craige from 1919 to 1947. [AnythingPopup id=”4″] 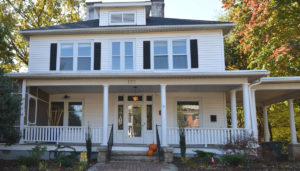 Thomas-Stultz House at 1211 West Fourth Street, circa 1915 (inventory property 477). The Thomas-Stultz House is a large but simple example of the Colonial Revival style so popular during the first quarter of the twentieth century. The two-story weatherboarded house has a hip roof, a shed dormer, interior chimneys, a handsome entrance with a glass panel door and leaded glass sidelights. A wrap around porch with Tuscan columns and a plain balustrade extends beyond the north side of the house to form a porte-cochere. [AnythingPopup id=”5″] 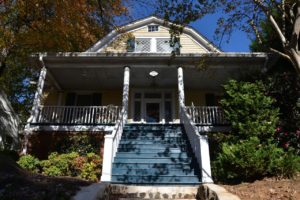 Roberts-Lehman House at 1110 West End Boulevard, 1911 (inventory property 530). The Roberts-Lehman House is one of the most distinctive of the Dutch-Colonial Revival houses in the West End. It is a large one and a half story weatherboarded frame dwelling with a triple-gambrel roof. The front gambrel has diamond-muntined upper sash which match the diamond-muntined sidelights and transom of the glass and wood paneled front entrance. [AnythingPopup id=”6″] 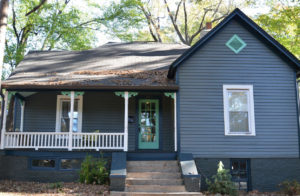 Mildred F. Bennett House at 125 Piedmont Avenue, circa 1906 (inventory property 491).This typical early twentieth century cottage is a one-story frame dwelling with a hipped and gabled roof, a right front projecting bay, a porch across two thirds of the facade with turned posts and sawnwork brackets. Late Victorian form and detailing of this home make it a positive contribution to the architectural character of the West End. The house is shown on the 1912 Sanborn Map, and local tradition claims it was built around 1906. [AnythingPopup id=”7″] 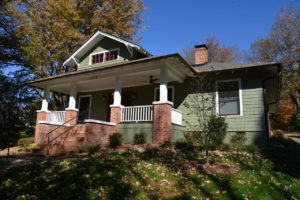 Wyatt-Honeycutt House at 1215 Brookstown Avenue,1924 (inventory property 295). The house stands as a low-slung bungalow, complete with wood shingle siding, a low hipped roof with overhanging eaves, a gabled front dormer, and a porch with square posts on what appear to be replacement brick plinths. Enjoy your stroll up the terraced lawn with steps leading from the granite retaining wall at the sidewalk up to this totally renovated house. [AnythingPopup id=”8″] 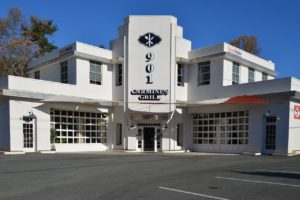 Quality Oil Company Building, Salem Smiles at 1063 West Northwest Boulevard, 1938. This notable façade at the corner of Reynolda and Northwest Boulevard was originally commissioned by West End residents Joe Glenn and his uncle Bert Bennett as a Shell Oil distributorship for their larger enterprise, Quality Oil Company. Purchased by Glenn and Bennett in 1930, the Quality Oil Company had grown to 175 employees by 1938 and was in need of a much larger space. Several features of the building were thought to be “one of a kind” at the time, including the “new style” hydraulic lift, a walk in vault complete with a built in safe, and most impressively, the largest tire warehouse in the state, which was capable of storing enough tires to outfit 375 automobiles.  [AnythingPopup id=”9″] 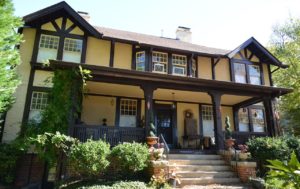