Two houses in the neighborhood are known to have been designed by Willard Northup and Leet O′ Brien; the Robert S. Galloway House in 1918 (380) and  the Bessie Gray Plumly House in 1921 (381), both  located on West End Boulevard. The firm of  Northup O’Brien also designed the 1927 Friends Meeting House (83) on Broad Street.

Willard Northup (1882-1942) was a native of Hancock, Michigan, who moved to Asheville, North Carolina, as a child. He received his architectural degree from the University of Pennsylvania. Northup came to Winston around 1906, and in 1913 he was joined in his practice by Leet O’Brien. Northup served as president of the North Carolina State Beard of Architectural Examiners and became a Fellow in the American Institute of Architects. Both he and Leet O′ Brien designed many commercial and residential buildings in Winston­ Salem as well as across the state. Leet O’Brien (1891-1963) was a native of Winston-Salem who received his architectural training at the Carnegie Institute of Technology. He served for two terms as the President of the North Carolina chapter of the American Institute of Architects. 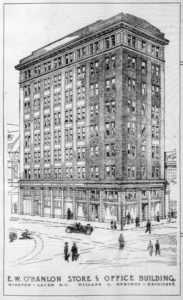 Willard Northup designed the second skyscraper in town, the O’Hanlon Building, located at the corner of Liberty and Fourth, shortly before partnering with O’Brien. They maintained an office in the RJ Reynolds Building on the 5th floor (523-526)