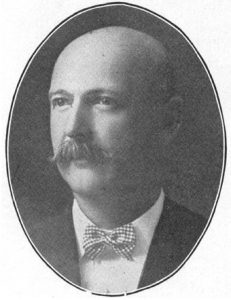 The 1892 Queen Anne residence of Edgar Vaughn (371) was designed by Hill Linthicum. The Pegram-Apperson House (123) on Summit Street also is attributed to him.

MHill Linthicum was born in Chatham, VA. on April 8th, 1860. He attended Danville Military Academy in Danville, VA and studied architecture in Baltimore, Maryland. About 1883 he joined his father’s architectural practice in Durham, North Carolina. He is listed, however, in the Winston City Directory for 1891-1892 and he practiced in Winston until at least 1896. He spent the majority of his career in Durham and died there in 1919.